The Bath CC is one of the oldest cycling clubs in the country, having been formed in 1880 during the “Penny Farthing” era. It began as the Bath Arial Rowing and Bicycle Club. Four years later the cyclists broke away from the rowers and changed the name to the present one. The reason for the break seems to have been the cyclists’ wish to run road races which at the time was greatly frowned upon. Prime mover in the break was Harry Frampton who became secretary the following year, a post he held for 45 years.

The first year after the break was a rather shaky one, the club finishing in the red to the tune of £4, which was a considerable sum at the time. From then on things rapidly improved and over the next few years the Bath CC was built up into one of the most prosperous cycling clubs in the country. Frampton was a most capable man of business and under his efforts the membership gradually increased. Socially prominent Bathonians were persuaded to become Vice Presidents and in the next decade, in addition to town councillors and MPs, the club boasted such assorted luminaries as the cricketer W G Grace, the Marquis of Bath and the Bishop of Bath and Wells. 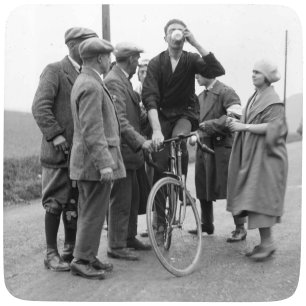 From 1885, Frampton took on the running of the club’s “Athletic Festivals” held in August. These had been organised from 1881 with moderate success. Now, under Frampton’s energetic management, they blossomed out from being purely local affairs to meetings of national stature in spite of being on a grass track. The main attraction was the “Five” with which the meeting traditionally ended. For this event Frampton managed to provide a seemingly endless series of valuable challenge cups. The club has one memento from this era, the “Tempest Plate”. This is a massive silver salver and wine ewer given to the club in 1897 to celebrate Queen Victoria’s Diamond Jubilee. A number of good riders were attracted to the club such as the Sleightholm brothers and S W Alexander and a number of local championships were won for the club.

Following the break with the rowers, the club began to run four or five road races a year at distances from one mile to fifty.There was also a 12 hour race. The club’s road races were well conducted and there were good relations with the local police. The club did not, therefore, suffer the problems that beset the London clubs. Nevertheless, it could not hold out against public opinion in the cycling world and in 1901 voted to change over to Time Trials. 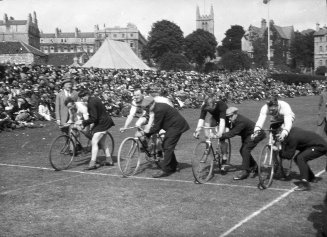 Track racing with a difference!

Like other established clubs, the Bath CC rose to great heights of prosperity and social standing during the cycling boom of the 1890s. The Athletic Festivals became one of the focal points of town’s social year and made substantial profits. In the Victorian charitable tradition, the club also started an “Old Folks Dinner” for the poor people of the town and this continued until the First World War. Although the club’s prosperity continued right up to the war, there were disquieting signs. The social side of things started to take precedence over actively riding the bike and a motor section was formed!!

During the war, there was initially an attempt to carry on as usual and the committee threw itself energetically into promoting the formation of a military motor cycle body and a company of the Athletic Volunteer Force. However, when conscription came in, activity contracted and eventually drifted to a care and maintenance basis.

A very different world awaited members returning from the conflict. Inflation had devastated the funds and the club organisation had to be built up again. Fortunately the promotion of a “Victory Sports” made a substantial profit which helped the club to get back into its stride. However, the pre-war social level was never to be recaptured and although the club was to thrive between the wars it was a “Silver Age” compared to the “golden Age” of pre-war.

Time trialling flourished. In 1919 an open 50 mile event was started that was to become a West Country classic and in 1923 the club joined the newly formed Road Racing Council. Grass track racing, too, retained its popularity and the club’s riders competed at most local sports and flower shows. The Athletic Festivals now known as the August Sports had been successfully restarted after the war and attracted stars of the period. There was still considerable social activity and Bohemian Concerts, Ladies Days, Whist Drives and Lantern Lectures continued to be run. There had been trouble with the motor section though and in 1928 it was finally wound up. In 1927 the famous pre-war rider G P Mills came to live in Bath on his retirement and the club felt it a great honour when he consented to become President. 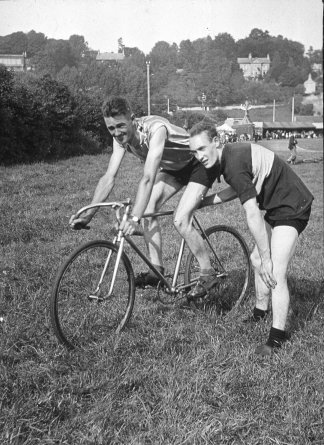 In 1929, the club, which until then had been all male, finally moved with the times and agreed to admit female members. The following year the club was saddened by the loss of Harry Frampton who had remained secretary until he died. It was not the only loss the club sustained that year for, after having been competed for since 1911, the club’s last pre-war challenge trophy, the Dunlop Gold Cup, was finally won outright be Jack Sibbit of Manchester Wheelers. Sadly the club could no longer afford to replace it. The 1930s were a golden age for record breaking and this had its effect on the club. Two new routes were established, Bournemouth and back and Salisbury and back and there was a spate of record attempts by club members. Time trialling was going from strength to strength and when in 1937 the Road Racing Council reconstituted itself as the RTTC the Bath CC quickly joined.

Immediately on the outbreak of World War II, the club adopted a policy of keeping going as long as possible. This was extremely successful. Members in the Forces were excused subscriptions and efforts were made to keep in touch. There were difficulties in running club dinners but these were surmounted and there were even innovations. In 1941 a veterans 25 was run for riders too old for active service and in 1943 there was a Whit Monday Sports held in response to the government’s “Holidays at Home” campaign to keep up civilian morale. The following year a 50km closed circuit mass start race under NCU rules was started in the Victoria Park in response to the same call.

After the war there was a surge of interest in bicycle polo and the club ran teams for a number of years. In 1945 the RTTC had started to run National Championship time trials and the following year the club promoted the Championship 50 won by Albert Derbyshire. The club also affiliated to the Youth Hostels Association. All was not well, however, and at the 1947 AGM the proposition was made that the club be disbanded. This seemed to jerk people to their senses and from then on things began to improve again. In 1952 junior championships were introduced and in 1953 the club gave way to the pressure of its more adventurous members and affiliated to the British League of Racing Cyclists. This was the start of a great period for the club but was, sadly, to see the last of a long series of August Sports Meetings in 1955. 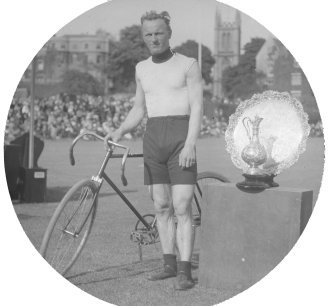 A Theaker with the Tempest Plate and Ewer

Although the club had usually had one or two good riders, there had seldom been anyone who was more than locally good. Now there arrived together on the scene an outstandingly good road racing man in international Tony Wills and an outstanding time triallist, Ian Rogers. These were supported by a number of riders nearly as good. Now, for several years, the club was the dominant force in local road races and time trials and on the fringes of the national scene. The early sixties were also an interesting period for the club in another direction. Over in Bradford-on-Avon Alex Moulton was developing his small wheeled bikes and a number of members were involved in various ways, some testing the machines on the road and in races and one or two eventually going to work for him.

As so often happens after a period of success there followed a low period. But then, in the second half of the seventies there followed another period of racing prominence, with Tony Evans and Mike Clothier dominating local time trials. The club benefited from the increasing interest in cycling despite the problems of many clubs and is still a flourishing organisation on the sociable traditional English pattern of club runs and time trials. It still makes its contributions to the sport as well, supplying officials to local cycling organisations as well as promoting several time trials annually.

On the 1st May 1960 to celebrate the Club’s 80th anniversary the Bath CC promoted an Olympic selection Four up time trial over 53 miles.

A second national championship was promoted in 1987 when the club was entrusted with the RTTC National 100 mile Championships.

On 28th March 2010 the Bath CC promoted Round 1 of the National Rudy Project Hilly Series. The headquarters was the Frome Football Club and the course of some 24 miles went through Maiden Bradley and Mere before climbing over the Deverills, much of the route used for the Club’s open hilly event over many years. The event consisted of Disabled, Veteran, Women, Juniors and Senior and was very successful calling on considerable support from the club – which responded by some 40 members, an exceptional effort.

The Bath Chronicle story of how we acquired the Tempest Trophy can be read here and you can see the page of the chronicle here. Both produced (c) The British Library Board.

If you are interested in the club’s record history, then take a look at the work by Peter Wilson and Tony Thorne to take the bound Bath CC records book and make it available electronically. It not only has the records but also many photographs of the holders.  Download from our Club Records page.