Today, a field of 34 female starters women set out on the Stowey circuit to compete for the win.  Thank you to our Sponsors Abel + Imray, NoPinz Motip Race Team, Pronto Bikes and 73 degrees we were able to offer a prize fund of over £1,000.   With £250 prize money up for grabs for first place, and an equal distance to the men’s race in the morning, there was a very strong field of female riders, including previous national road race champion – Jo Tindley. 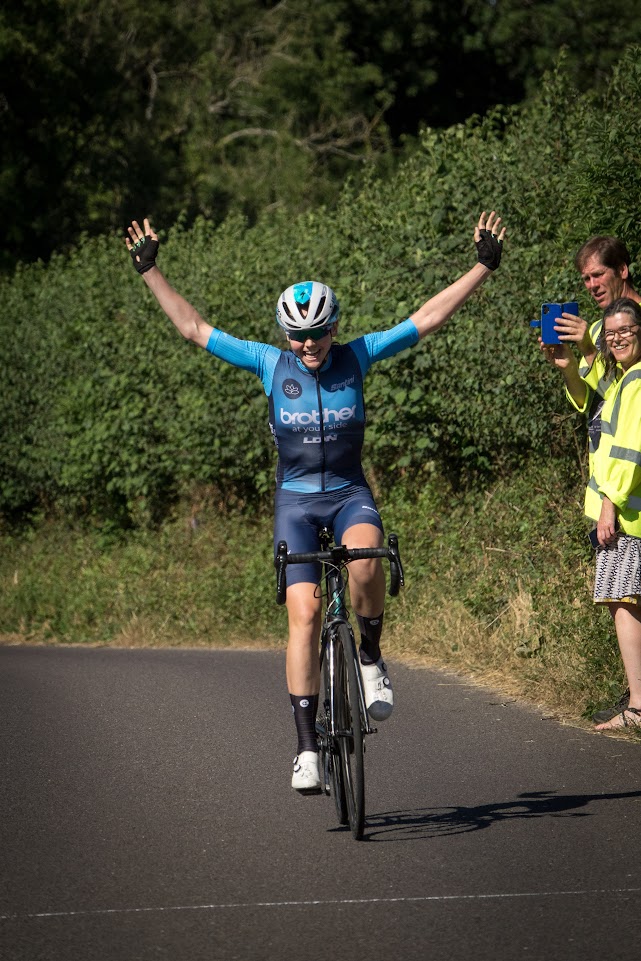 In the burning heat, the relentless grind up Stowey Hill 8 times over was no easy feat, and the front bunch did fantastically to maintain consistent lap times, ranging from approx. 16-18 minutes per lap throughout the whole race. 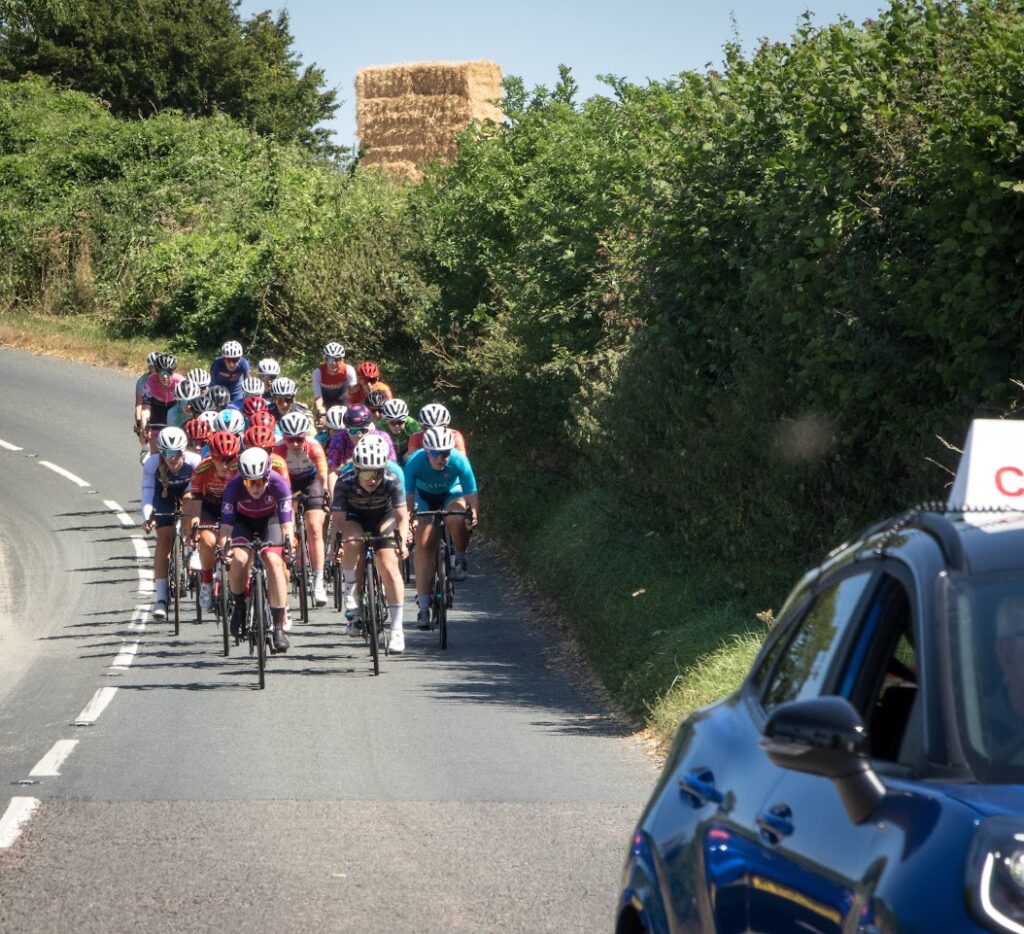 The riders finished their first lap as 1 practically complete group, the QOM points at the top of the climb were taken by Jessica Finney of CAMS-BASSO.  This acceleration started what can only described as a form of erosion, leaving a leading bunch of around 16 women as others gradually dropped off the back during lap 2. 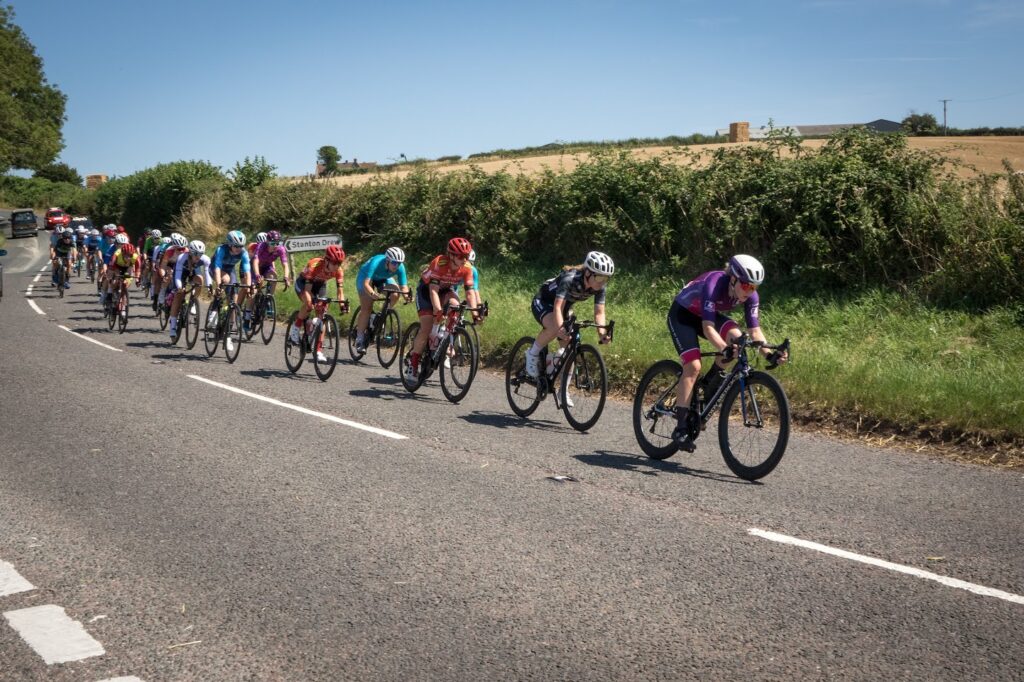 By the beginning of lap 3, the front group was 1 minute and 30 seconds ahead of the other riders – a lead which only expanded to become 2 minutes 10 seconds by the end of the lap. During lap 3, rider 37 (Miriam Bullock of Grinta Coaching) from the front bunch was dropped behind the commissarie’s car, but put in an almighty effort to rejoin the front group, closing at least a 150m solo.

Yet despite this effort to catch the pack, Miriam was dropped again from the bunch during lap 4, along with Laura Senior representing team Laka Pedal Mafia RT 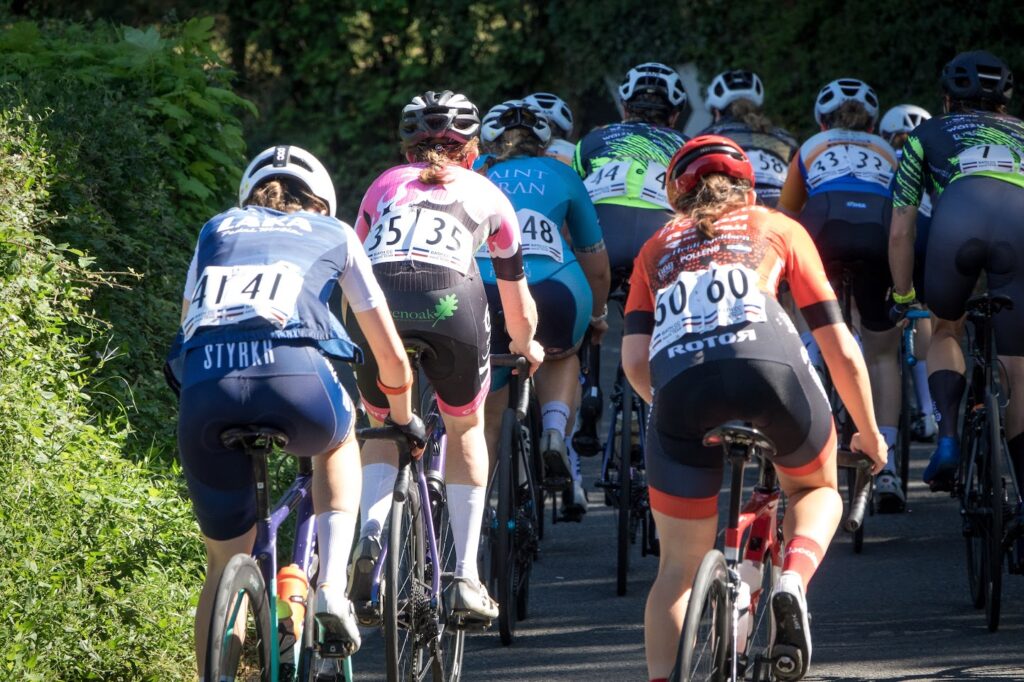 Yet both put out some hefty power and closed down more than 250m to hunt down the leading riders before yet another bash up Stowey Hill.

In spite of (or perhaps because of) the sheer effort required to rejoin the front bunch for a second time, Miriam was dropped again at the top of Stowey Hill. Having gasped between sharp intakes of breath on the previous lap that she “couldn’t keep up” this chasing for much longer, I thought this could be it for her. But it was not so! They pulled out yet another thrashing effort to rejoin the bunch and – amazingly – were successful at doing so.

Yet on the 5th climb up ‘ol Stowey Hill, Miriam was finally dropped by the leading bunch for good. After showing stellar resilience and pure, grit-teethed determination, it seemed that she had finally blown up after 3 rounds of chasing. But what power and perseverance she left out on that road.    Jessica Finney of CAMS Basso made it 3 wins out of 3 on the QOM – and was guaranteed a win in that competition.

Laura was also dropped on the climb, along with Bianchi rider Tamsin Miller, who’s hopes of success were unfortunately scuppered by a gear-related mechanical as she ground almost to a halt up the steep ascent whilst the bunch pulled excruciatingly away.

Lap 6 saw the leading bunch – now reduced to 12 – secure a 4 minute lead over the remaining bunch of chasers, with Miriam and Rosie Wayland of  FTP-Fulfil The Potential-Racing appearing to struggle towards the end of the lap.

True to this, the beginning of lap 7 Jessica’s efforts in the QOM competition saw her join Rosie, and Finish Line RT’s Bexie  & Miriam Jessett just off the back of the front of the bunch.

The group worked together to bring back a rapidly extending gap, catching the bunch just on the approach to Stowey Hill bottom, ahead of the final lap.

On the 7th time up Stowey, Ella Maclean-Howell of Tofauti Everyone Active took the final QOM win to finish in 2nd place 1 point behind Jessica. 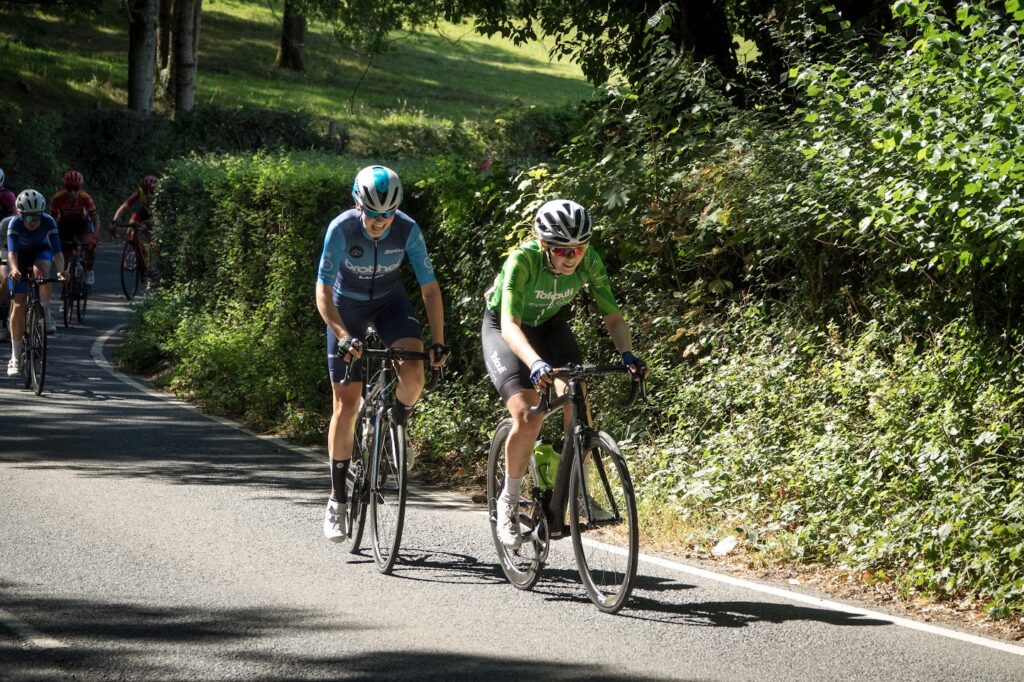 Lap 8 saw Bexy Dew, off the back of the front group for good, despite her best efforts to try and stay with them up Stowey Hill. Her teammate 51, however, managed to say with the bunch for the remainder of the race, making her and Bexy’s earlier team effort worth while. At this point, the leading bunch had a 6 minute and 30 sending lead on the remainder of the bunch, with 8 riders comprising the group. Team Brother London’s Lucy Lee and Alex Morrice headed the front of the race during the final lap, hinting their intention to maintain such positions across the finish line.

During the final climb to the finish line – one last push up the mammoth (by this time mountainous) Stowey Hill – the group remained together. We waited for someone to pounce – but they remained calm. Only halfway up did the inkling of positions become apparent, with Alex Morrice leading the group by a margin. But by the final corner, the podium positions were clear as day, with Alex maintaing first place, from Jo Tinfley in 2nd place and junior Ella Maclean-Howell of  Tofauti Everyone Active . Lucy Lee slid down the group as they approached the top of the hill, having done her bit to assist Alex in getting the win.

They crossed the line, welcomed by cheering and applaud, and Alex Morrice won her first National road race.

All the women did fantastically to set such a high standard of racing on this brutal course in such sweltering weather conditions, and it was a pleasure to witness this safe, powerful race from the commisaire’s car.

Congratulations to every participant – recover well from that leg basher!

Thanks to Dave Atkinson of road.cc for the photos 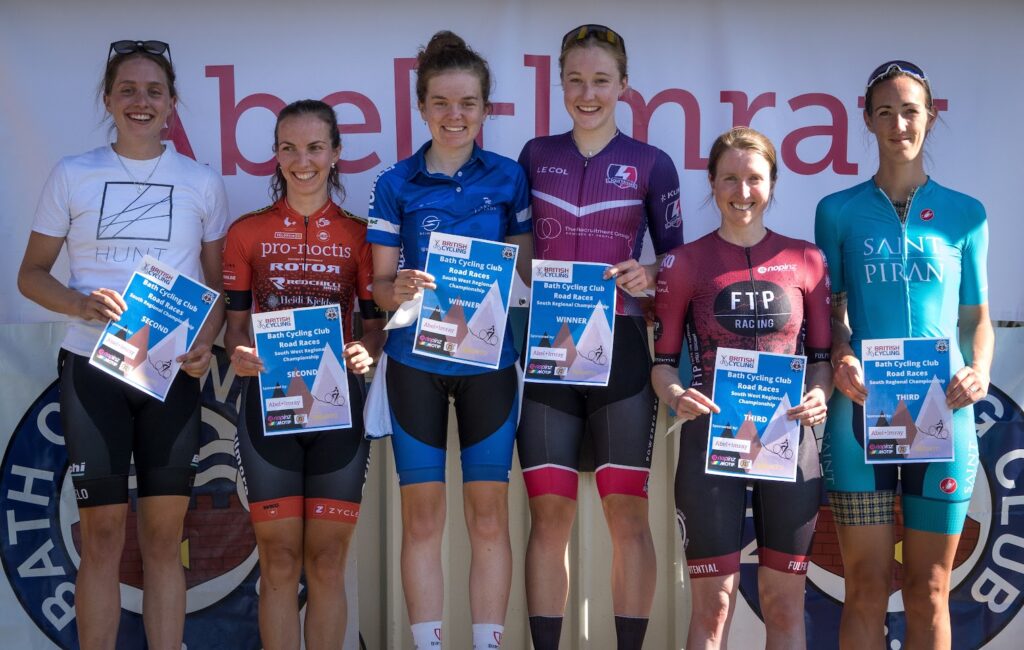 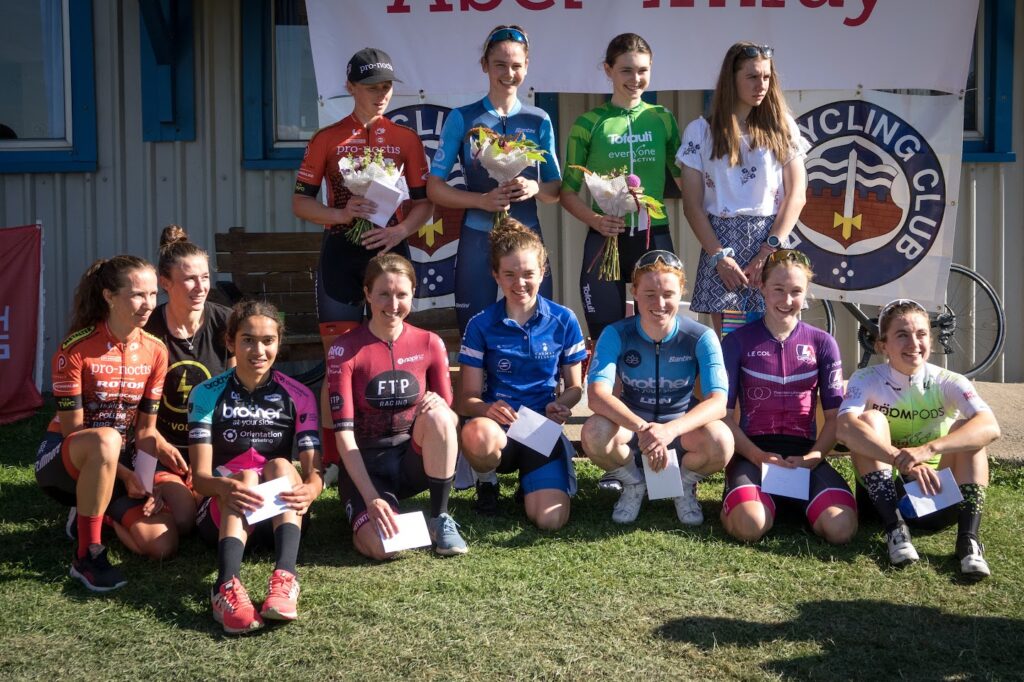 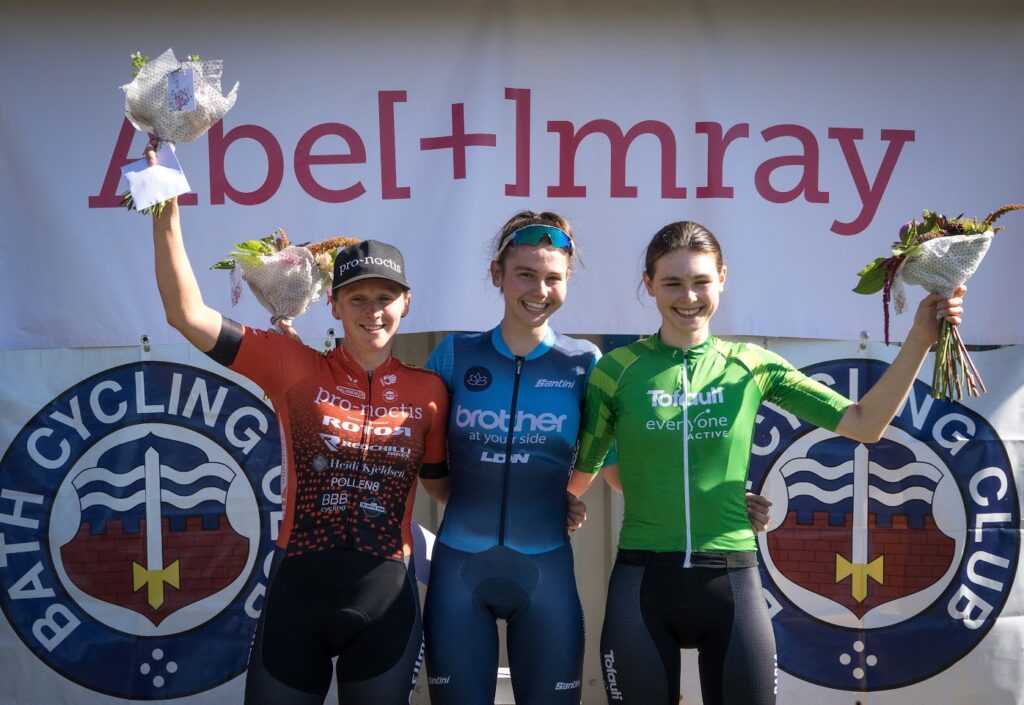 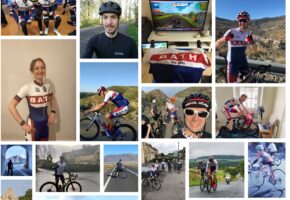 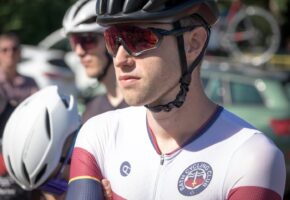 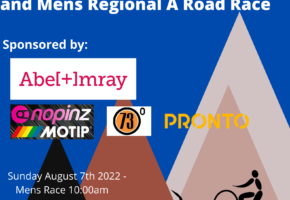 It’s Pride Day in Bristol on July the 9th. Show a bit of colour, to celebrate and show our support for the LGBTQ+ community on club rides on the weekend of the 9th and 10th of July.